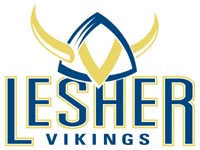 ​Lesher middle school has a long and interesting history as a part of the Fort Collins community, one that is an inspiring and collective reflection of the city it serves. Lesher is the oldest continually operating middle school in the Poudre School District system. In 2005 Leshser was faced with the daunting prospect of being closed in within 3 years if the administration was not able to solve the multitude of issues that the school was struggling with These issues included gang related issues and large numbers of students choosing to go elsewhere in the district. That same year Tom Dodd, a former Physical Education and History teacher with an impressive knowledge of high school mascots across the United States, became the acting principle of the school. If you ask any of the staff at Lesher you will hear unabashed pride in what Dr. Dodd has been able to accomplish since taking the Vikings helm. In 2005 Lesher had a struggling student body of 500 students with more choosing to leave each year. Currently Lesher currently has 765 students with impressive demographic diversity across categories. Lesher now has 35% minority students, 45% of students are part of the free and reduced lunch program, 25% of students are a part of Lesher’s impressive English Language Learners (ELL) program representing 17 different languages that are spoken at the school, additionally 28% of students are a part of Leshers gifted and talented (GT) program. Dr. Dodd informed us that he has tried to build the school on the ideals of high expectations and support creating a community of equity. This can be an especially difficult task due to the fact that Lesher attracts some of the most affluent students in the city in the same building as 17 students effected by homelessness. The school has been transformed as having a reputation Dr. Dodd described as the school with problems to what he now describes as, “the funky IB school downtown”, one that consistently out performs other schools in the PSD system. Perhaps the most prominent and unique aspect of the school is the International Baccalaureate academic program. This program strives to create students who are lifelong learners with an extreme emphasis on the well-rounded nature of their education. As stated on the Lesher website the IB program aims,
“…encourage students across the world to become active, compassionate and lifelong learners who understand that other people, with their differences, can also be right.”
An example of this commitment to the well-rounded student can be seen in the 2006-2007 renovation of the school which added a new art room, as well as new media and fitness centers. It is this commitment to ensuring the quality of the diversity of student’s educations that makes Lesher a unique and attractive educational option. Another layer of the success of Lesher is the community presence and parental involvement that is a part of the DNA of the school. There are numerous resources on the website specifically for parents as well as a letter to them from Dr. Dodd describing the ideals of the school and communicating vital information about the beginning of the year. Additionally there are resources for the PTO organization referred to as “Viking Volunteers” and various opportunities for parents to volunteer in and be engaged with the school community. The Lesher community is built upon the motto of, “A school for the mind; a home for the heart” after spending time there I see the evidence and realization of this motto in an amazing community that engages and challenges students while supporting and celebrating its staff.

​During my time as a student teacher at Lesher Middle School I had the opportunity to work with 6th, 7th, and 8th grade students in a large and well equipped art room that provided space and opportunity for creative discovery. The room consisted of eight large art tables seating four or five students depending on class size. The average 6th grade class consisted of twenty students while the 7th and 8th grade classes averaged thirty-four students per class. The room was accommodated to meet these large class sizes by placing the needed supplies on long counters and shelves around the room. Three sinks at the back of the room allowed for students to access water for projects whenever needed.
While at Lesher I had the opportunity to independently teach 6th, 7th, and 8th grade classes. I was able to create and implement a unit surrounding identity exploration and color theory for the 6th grade classes.

Students at Lesher are continually given the opportunity to make positive decisions in and out of the classroom. If students choose to make negative decisions a three redirect system is used, upon the third redirect students are engaged in a hallway conversation or office referral depending on the offense. Students with special needs have documented IEPS or 504’s are accommodated and monitored in the art room to meet their specific needs and facilitate an opportunity for them to have fulfilling artistic experiences.